Shower and thunderstorm activity associated with an elongated area of low pressure located several hundred miles east of the Windward Islands has become a little better organized during the past few hours. Additional slow development of this system is possible during the next day or two, and a tropical depression could form as the system moves west-northwestward at 10 to 15 mph across the Lesser Antilles and into the Caribbean Sea. After that time, land interaction could limit development potential over the weekend. Regardless of tropical cyclone formation, gusty winds and heavy rainfall are possible across portions of the Lesser Antilles, Puerto Rico, and the Virgin Islands on Thursday night and Friday. Interests in those islands should closely monitor the progress of this system. An Air Force Reserve Hurricane Hunter aircraft is scheduled to investigate this system tomorrow afternoon, if necessary. * Formation chance through 48 hours…medium…50 percent. * Formation chance through 5 days…high…60 percent. 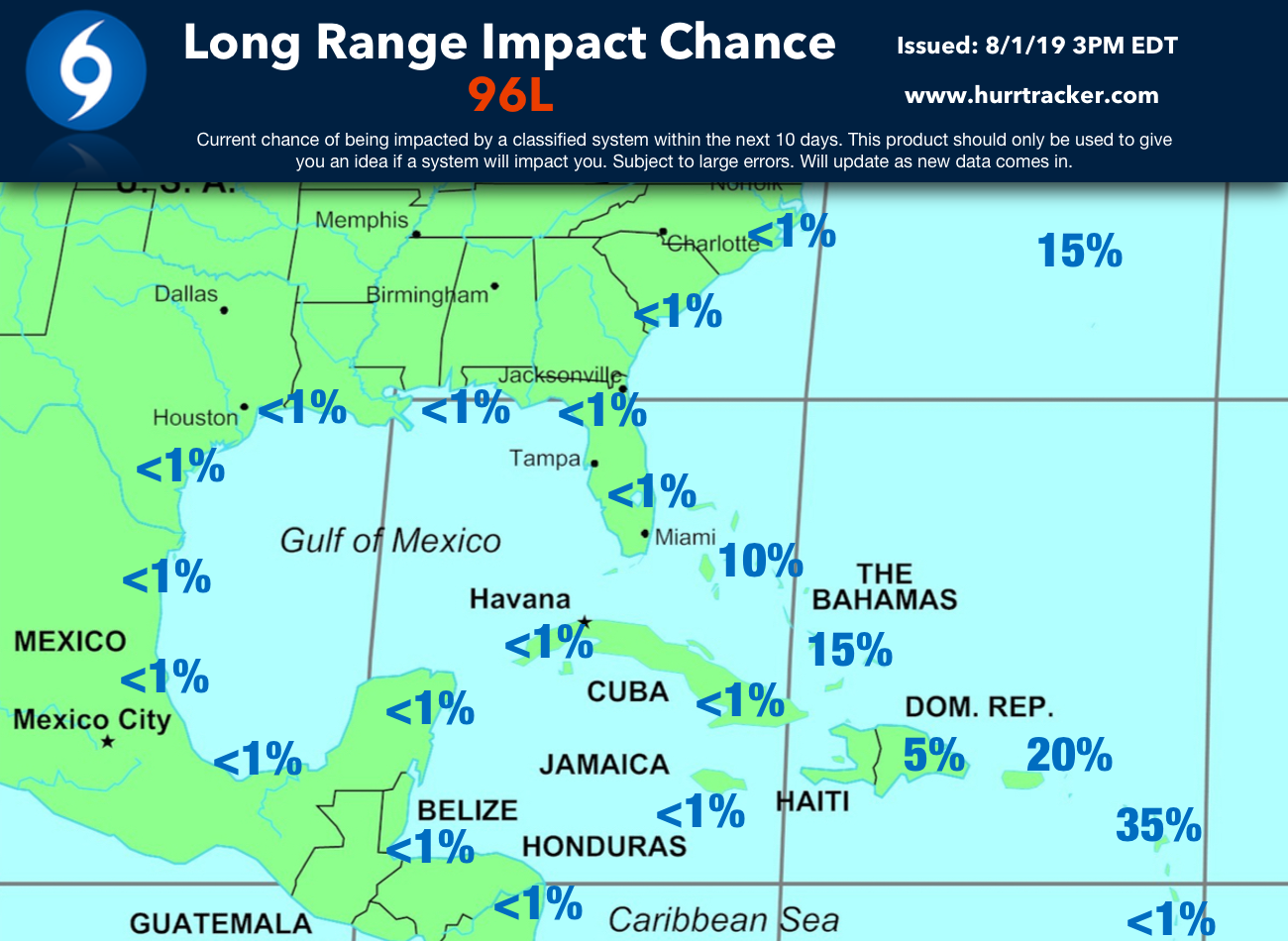 We are watching for a potentially major winter storm to affect a long swath of the Deep South this week – including places better known for their beaches, balmy breezes and hurricanes. This will include some of the areas affected by Winter Storm Kronos just last week – but it includes millions of people farther east as well.

The threat stems from the combination of a bitterly cold arctic air mass plunging southward behind a sharp cold front, while moisture streams northward from the Gulf Coast. As the moisture crosses into the cold air behind the front, a swath of frozen and freezing precipitation is likely to break out.

Let’s step through the forecast and get into the details and uncertainties.

Long Stretch of Ice and Snow

The latest blast of arctic air, already bursting south into the Midwest, will reach the Deep South Monday night. Temperatures should be at or below freezing by Tuesday morning along the Gulf Coast from Houston to Pensacola, Fla., as well as portions of the Carolina coast.

As Tuesday wears on, a broad zone of rising air will develop across the entire Gulf Coast (except for southwest Florida) and the Atlantic Coast of the Southeast, along and behind the arctic cold front. This will allow an elongated area of precipitation to develop from South Texas all the way to the Carolinas.

Since much of this precipitation will be falling over areas where near-ground temperatures will hover below freezing, the result will be a mess of wintry precipitation.

Exactly which form the precipitation takes will depend on temperatures several thousand feet aloft. In some areas, the entire atmosphere will be below freezing, and those areas will be vulnerable to snow. In areas closer to the Gulf Coast, there is likely to be a layer of above-freezing air above the ground, setting the stage for sleet and/or freezing rain.

But model projections disagree on exactly how far south the all-snow scenario will get – not just Tuesday, but for the duration of the storm. For that matter, it is not entirely clear just how far north (inland) the wintry precipitation will fall. More on that later.

By Tuesday night, as an upper-air disturbance moves into the western Gulf of Mexico and a separate area of weak low pressure develops off the Carolina coast, we expect areas of heavier precipitation to break out from the central Gulf Coast to the Carolinas. This will bring the potential for heavier snowfall and/or ice accumulation in these areas, again depending on the precise vertical temperature profile in the atmosphere.

Precipitation should end west of the Florida Panhandle by Wednesday morning, but Wednesday will see precipitation lingering from central and northern Florida to southeast Virginia. While wintry precipitation will probably stay north of the Florida/Georgia border (though not by far), leaving the Florida Peninsula just wet, there could be additional snow and ice accumulations from south Georgia northeastward.

Where, How Much, and How Bad?

Forecasting snow and ice accumulations in the Deep South is, as you might expect, always tricky.

There are two main factors contributing to the uncertainty this time:

Computer models continue to differ on the exact placement of the heaviest snow and ice accumulations.

This does appear to be a fairly moisture-loaded system for areas along the coasts, so snow and ice accumulations could be quite heavy, particularly from central and south Georgia to the eastern Carolinas.

Greatest Icing Threat: Right now, it appears the most significant icing is possible from southeast Louisiana to south Alabama, south Georgia and coastal South Carolina. This could lead to falling limbs, trees, and significant power outages.

Greatest Snow Threat: The greatest chance of significant snow accumulations at this time appears to line up from central Georgia into central South Carolina, eastern North Carolina and far southeast Virginia. If the precipitation falls as all snow and does not mix with sleet, amounts of up to 6 inches or more are within reach.

The threat of icing and a few inches of snow or sleet will also extend westward into southern Mississippi, Louisiana and southeast Texas.

Regardless of the precipitation type and amounts, very hazardous travel is likely across a long swath of the South from southeast Texas to southern Louisiana, southern Mississippi, southern Alabama, central and southern Georgia, South Carolina and eastern North Carolina in the Tuesday to Wednesday timeframe.

As for the second question, it currently appears that accumulating wintry precipitation will mainly stay south of the Interstate 20 corridor from Dallas-Fort Worth to the Mississippi River, missing cities such as Shreveport, La. The scenario is more iffy farther east, with a chance of light snow accumulations for Jackson, Miss.; Birmingham, Ala.; and Atlanta. Some computer models bring light snow accumulations all the way into the northern Atlanta suburbs. Still, there remains a chance that those areas will see nothing, and the more likely zone for accumulating snow and ice remains south of those cities.

As with any Deep South winter storm, additional complicating factors include warm ground (high temperatures in the 50s, 60s and 70s Monday) as well as the amount of precipitation that falls and what form it takes.

This storm has the potential to disrupt travel and power. There is uncertainty on the amount of wintry precipitation that will fall. However, if ice accumulations reach the higher end of the range of possibilities, there could be widespread power outages and road blockages due to falling trees and tree limbs, not to mention the weight of ice on power lines themselves.

Travel could become dangerous or even impossible in some areas due to heavy buildup of ice and/or snow.

Our WeatherReady winter weather safety section has more tips on how to prepare for the possibility of dangerous driving conditions and extended power outages.

These ranges are well above the seasonal average of 12 named storms, 6 hurricanes and 3 major hurricanes.

“With the devastation of Sandy fresh in our minds, and another active season predicted, everyone at NOAA is committed to providing life-saving forecasts in the face of these storms and ensuring that Americans are prepared and ready ahead of time.” said Kathryn Sullivan, Ph.D., NOAA acting administrator. “As we saw first-hand with Sandy, it’s important to remember that tropical storm and hurricane impacts are not limited to the coastline. Strong winds, torrential rain, flooding, and tornadoes often threaten inland areas far from where the storm first makes landfall.”

Three climate factors that strongly control Atlantic hurricane activity are expected to come together to produce an active or extremely active 2013 hurricane season. These are:

NOAA’s seasonal hurricane outlook is not a hurricane landfall forecast; it does not predict how many storms will hit land or where a storm will strike. Forecasts for individual storms and their impacts will be provided throughout the season by NOAA’s National Hurricane Center.

Also this year, Doppler radar data will be transmitted in real time from NOAA’s Hurricane Operations Center Hurricane Hunter aircraft. This will help forecasters better analyze rapidly evolving storm conditions, and these data could further improve the HWRF model forecasts by 10 to 15 percent.

The National Weather Service has also made changes to allow for hurricane warnings to remain in effect, or to be newly issued, for storms like Sandy that have become post-tropical. This flexibility allows forecasters to provide a continuous flow of forecast and warning information for evolving or continuing threats.

“The start of hurricane season is a reminder that our families, businesses and communities need to be ready for the next big storm,” said Joe Nimmich, FEMA associate administrator for Response and Recovery. “Preparedness today can make a big difference down the line, so update your family emergency plan and make sure your emergency kit is stocked. Learn more about how you can prepare for hurricane season at www.ready.gov/hurricanes.”

Next week, May 26 – June 1, is National Hurricane Preparedness Week. To help those living in hurricane-prone areas prepare, NOAA is offering hurricane preparedness tips, along with video and audio public service announcements in both English and Spanish, featuring NOAA hurricane experts and the FEMA administrator at www.nhc.noaa.gov/prepare/.

NOAA’s mission is to understand and predict changes in the Earth’s environment, from the depths of the ocean to the surface of the sun, and to conserve and manage our coastal and marine resources. Join us on Facebook, Twitter and our other social media channels.

Baton Rouge: Louisiana residents can save money on flashlights, batteries, generators and other emergency supplies during the 2013 Louisiana Hurricane Preparedness Sales Tax Holiday on Saturday, May 25, and Sunday, May 26.

“We encourage everyone to get prepared now,” Louisiana Department of Revenue Executive Counsel Tim Barfield said. “This is a chance to save money while helping to keep your family safe and comfortable during and after a hurricane. Don’t wait until there’s a storm coming, or until one has struck.”

The sales tax holiday exempts eligible items from the 4 percent state sales tax. The exemption applies to the first $1,500 of the purchase price of each item.

Additional information about the sales tax holiday is available online at: http://www.revenue.louisiana.gov/sections/Publications/HurricanePrepSalesTaxHoliday.aspx

More than a dozen sculptures that will be used to call attention to evacuation points around New Orleans are arriving in the city.

The statues are simple larger-than-life stick figures that appear as though they are poised to hail a bus. They’re being unloaded Monday and will later be installed at 17 pickup points for New Orleans residents who need transportation out of town when a hurricane evacuation is ordered.

They were designed by Boston artist Douglas Kornfeld who was selected for the work by the Arts Council of New Orleans. That group is working with Evacuteer.org, an organization that coordinates volunteers who help with the massive evacuation effort that accompanies a hurricane threa